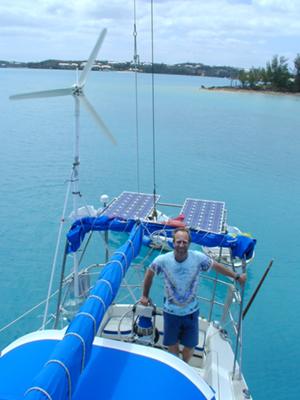 My power plant for 5 years

I arrived at the shore about 4:30 in the afternoon and the wind was already up to 40 knots and it was too rough to paddle across to the boat.

I stripped down, stuffed my clothes in a dry bag and swam across.

The first thing I did was to swing my wind generator out of the wind and secure the blades with the factory provided tie down system.

Next I set to attaching the storm mooring which took some time as the wind was freshening. By the time I got it accomplished the wind was approaching 60 knots. I went below to catch my breath.

My wife and I were living aboard in Bermuda at the time of this storm, later known as hurricane Karen. She decided it was too rough to attempt to get to the boat and stayed at a friends house for the night.

I knew I had left my wind genny spinning when I left that morning and that it was recommended to shut it down in winds over 30 knots and so had elected to come home and deal with it. This meant I was in for a rough night.

At 60 knots it was too rough to consider swimming ashore and as there was no storm predicted I assumed this gale was a "minor' temporary blow and would soon pass. I was mistaken.

After, several hours bracing myself between the berths to avoid bruising as the boat tossed in the choppy swell I tried to sleep, to no avail.

The wind rose through 70 knots (hurricane force), up to eighty, and eventually around midnight we had a 90 knot gust.

I heard the wind genny rev up like a light aircraft as she cut through her tie down. In an instant she self distructed, blowing backwards off the pole. The blades shattered as they hit the pole and crashed down into my solar PV array below. I moaned as realized I'd just lost my entire energy producing side of my system. I spent the night depressed and eventually slept.

In the morning, I awoke to bright sunshine and a mild chop. Emerging from the cabin first I checked my panels, I was amazed to find them intact. The wind genny was totalled. I never found a shred of the blades.

When I went back to work I ordered a new genny and sent the battered one in to be rebuilt.

KISS, the manufacturer, handled the parts, I paid the labour. When I sold the boat I left the new genny on board but I still have the rebuilt one.

Someday I hope to live somewhere with enough wind to justify putting it up.

You can read more about my adventures with renewable energy and sustainability in general at http://sustliving.blogspot.com/